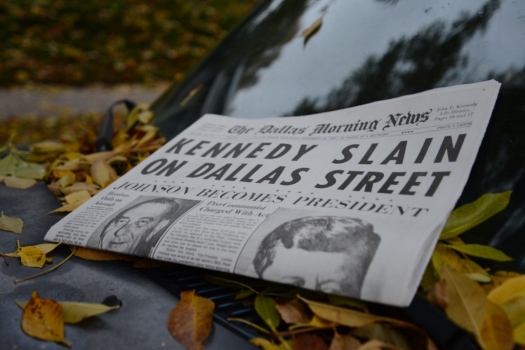 The events in Dallas 53 years ago are dimming in the nation’s mind, but I always remember.

I was just three months into 9th grade in old school building now gone. I was in the downstairs hallway, by the doors to the auditorium, when the principle made the announcement over the loudspeaker that the president had died.

The news hit me hard.

JFK had awakened my political interests just three years before, when I was 11 or twelve, an interest that continued through a six-year stint in journalism and since. I’d just started being aware of politics and presidential elections then, though, and vaguely remember seeing the Republican convention on TV four years earlier. Our little-screened black and white Sylvania set that sat just to the right of the front door in our old living room, before the remodeling.

One Saturday morning in the fall of 1959, when I was 10 or 11, during the campaign, I went to town with dad as I often did. He was superintendent of the county schools and sometimes took me in with him on weekends. I’d ‘help’ his secretary run the old mimeograph machine with the smelly (and probably toxic) chemicals it used to produce copies in that odd purple type.

On one of those Saturdays -– I remember it was a warm fall day, or maybe late summer –I was wandering by myself around downtown, and stumbled into the local Democratic Party campaign office storefront just off the main drag. It was open that day, and on some impulse I just walked in. The campaign worker said hello, in that way adults do to children that could be a problem, but certainly aren’t going to be any help. I couldn’t vote, after all.

I don’t know how long I was in there -– not long, though; it was a small place — before a campaign button caught my eye. It was something I’d never seen before, one of those plastic things with little ridged lenses that showed a different image depending on how you tilted it. I don’t even remember the messages. There was a picture of JFK, looking young (even to me, but then we were all used to seeing Eisenhower’s images everywhere, and he was an old man who’d had several heart attacks by then). Maybe it was the gimick of the multiple images, but it was also something about JFK …

I just HAD to have it. I didn’t have any money. They were selling them as a fundraising thing, and the cost was probably not more than 50 cents, an enormous sum to me then. And I knew you were supposed to pay for things you wanted, and that if you didn’t have the money, you did without it.

But all that suddenly didn’t matter: I wanted it. I pulled it from the mounting on the wall from among all the other buttons, and tilted it back and forth, up and down, reading the words over and over and memorizing Kennedy’s features. I had to have it.

I took it to the counter and read the man’s reaction intuitively. This was going to be a problem. He was willing to sell it if I wanted it, but his manner radiated skepticism. I decided the frontal approach was the only one, and asked how much it was. He told me, and I pretended to study the button again, hoping my anguish at not getting it was plain to see. I looked at him, and back at the button, and just blurted out that I didn’t have the money, but could I please, please have the button anyway? He wavered, realizing he obviously had in his office one of the few people in that rock-ribbed Republican area who might be one of his people… At least someday. He hesitated more, and my hope soared. He hadn’t said ‘no’ yet! “I really want this,” I said, hoping the logic of that would be apparent and convincing. “I like him,” I added, tilting the button and switching from the image to the words and back again, half-expecting something new to happen.

The man muttered something which could have been, “Well, I don’t know…..” And I decided on the spot that I’d better make a move or I was going to miss out on … Something big. “Thank you!” I said, beaming. “When I’m older, I’m going to vote for him!” He surrendered, muttering. When I saw that he wasn’t going to demand the button or the coins, I said a second hurried “than you” and stepped quickly out of the door onto the sidewalk, into the sun, feeling elated and flushed, and faintly guilty, like I’d just stolen something. He didn’t come after me, and I made my escape, walking the two blocks back to dad’s office before the police could find me.

I kept that button for years, and wish I knew where it was now. It’s lost, like most of the innocence of that time.

Three years later, the man I’d idolized starting on that day was dead and we were on our way to Pakistan for two years. He was shot in Dallas the day before my mother and I left to join my father in Karachi.

We were to fly TWA from Columbus to Washington, DC, where my newly married sister lived, stop there briefly and fly to New York and beyond.

The assassination threw the whole country into terror. Flights were canceled as the government tried to block the escape of any other possible assassins. No one knew if the shooting was just the first move by the Soviets preparatory to a nuclear attack.

It was all very frightening and confusing and my mother wasn’t one to comfort a fretful teenager all that much. There was too much on her mind.

We left Columbus a day later than planned. I was caught up in the excitement of the big trip and the flight at all, and the worries about going into the unknown of a foreign land 10,000 miles away, so I got lost in the moment, as children do. I just put it all out of my mind and kept my face glued to the window as Ohio, Pennsylvania and then Washington, DC crept into view below. I remember the approach to the old Washington National airport above the Potomac River, and saw the Jefferson and Washington memorials rushing up below.

We sat in my sister’s tiny one-bedroom second-floor flat in Alexandria for the next week, unable to leave. The events played out on TV to the cadence of the muffled drum and the color of black crepe everywhere. The funeral, as majestic an event as I have ever seen, gripping and sad, somehow noble, crushed me with a grief that seemed to know no bottom.

Then unbelievably, Oswald was killed in front of our eyes on live TV. It feels that the ugliness today started then. Sordid and snarling, typified by that final act of evil in a dirty police parking garage basement far away.

After a few days of brooding in the small apartment with nothing to do but watch TV, the adults, probably to get me out of their hair for a while, arranged to have me go into DC with my brother-in-law. I was just to go off on my own for the day downtown, on the Mall, while he went to work.

Jim’s office then was just a block or two off of Pennsylvania Avenue, near where the Holocaust museum is today. He pulled into the parking lot and I got out, told to come back to his office when I got tired of looking around.

It was about 7:45 in the morning, and the only traffic was federal workers coming in for the day. It was late November, but still sunny and warm. The mists from the river were clearing and the sun was rising in the smog and haze.

I walked up the short distance to the Mall, not sure where I would start.

No other person was in view, and the city’s activity was only a quiet murmmer in the background. Everything still felt the weight of sorrow. I felt as though I was the only person around that day, a feeling that was both comforting and frightening.

I climbed a rise to the Mall and looked across the wide expanse of the central grassy area, seeing nothing much at first. Then I noticed a man in a dark suit, white shirt and narrow dark tie on the opposite corner, maybe 50 yards away. I became slowly aware that he was looking intently at me. He carried something under his arm, something long and metallic.

I’d grown up on a farm and around firearms, and recognized it as a shotgun, felt a stab of fear. I noticed that he was not alone. Other men, similarly dressed, were standing a few yards apart all up and down the Mall, on both sides of the wide boulevard. I looked to my right, and saw a man only a few yards away, also looking at me hard, suspiciously, and talking into what had to be a walkie-talkie.

I’d been raised with stories of Eliot Ness and J. Edgar Hoover and gangsters, and saw immediately that he was cradling a Thompson sub-machine gun, the kind with the cylindrical magazine under the belly.

These were military men, I realized; and police. And they were not happy to see me standing there. I froze, not sure what to do. The man nearest me, realizing I was only a boy, said something into his radio and then ignored me further. I don’t know how long I stood there, but just wanted to get away but couldn’t move. It was then I heard the sirens, coming from my left up the Mall in the direction of the White House.

I saw two or three big, black limousines, flanked by riders on big Harley Police motorcycles roaring toward me like a dark wind. In a few seconds, they were in front of me and then thundered past. I saw the grim look on the motorcycle drivers faces, under their goggles and helmets and could smell the fumes. In the formation were two Cadillac limos, a shiny and ominous black, each with official flags on the front fenders flapping taut. In the second one, I thought I caught a glimpse of Lyndon Johnson, the man who was now president.

With a rush of foul and loud wind, they were past and gone to the Capitol. I heard on the news that night the Johnson had spent the morning conferring with Congressional leaders on how to manage the transition to his administration. I stole a glance at the man to my right. He looked at me again, only this time I saw the strain and grief. He held my eyes for a moment, nodded, his expression softer, then turned to join his comrades.

In was a moment when the universe just turn a page and moved on. Nothing was to be the same.

As Abraham Lincoln once wrote:

I hear the loved survivors tell
How naught from death could save,
Till every sound appears a knell
And every spot a grave..